There are people who understand more than others that “injustice anywhere is a threat to justice everywhere.” That is nonetheless what Martin Luther King believed. Journalist Jennifer Fierberg is among those who are passionate for justice particularly in Rwanda, Democratic Republic of Congo and the whole region of Central Africa. As she covered Rwanda Day Boston 2012, a two days event organised by the Rwandan government from Friday 21 to 22 September to showcase the country in US, I reproduce here her account of what happened. By the time of writing this note, her article about the event had already appeared on different online news outlets [Inyenyeri News and Salem-News]. 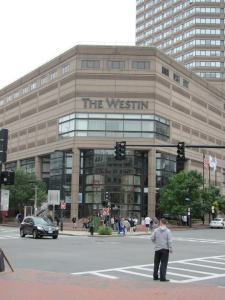 How many have to die?

(BOSTON) – At the corner of Dartmouth and St. James in Boston, Massachusetts about one hundred people gathered for two separate but related reasons.

On the one side were approximately a dozen supporters for President Paul Kagame of Rwanda and directly across the street just over one hundred people gathered to protest the arrival and hosting of His Excellency in this American city.

About a dozen supporters from inside The Westin Copley came out with signs while singing and dancing in celebration of this ongoing controversial leader. Their banners read “Rwanda Day 2012” and “Agaciro” (which means Dignity in Kinyarwanda, the native language of Rwandans) and another that had a supportive statement of Paul Kagame’s new financial plan for Rwanda.

Back on the other side of the street over 100 Rwandan’s, Congolese, Burundian and Tanzanian people also gathered. They were chanting “We are human, how about you,” “Move Kagame, get out of the way!” Others chanted “Kagame, get out of the Congo” while holding banners and signs listing the crimes President Paul Kagame is accused of in the U.N. Mapping Report on the Democratic Republic of the Congo (August 2010) the Report by the U.N 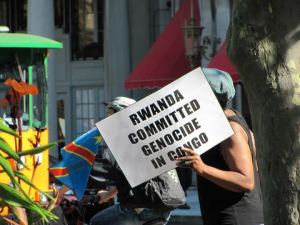 Group of Experts (June 2012) listing in detail the crimes and evidences that Paul Kagame and his regime are currently engaged in through the M23 that is committing atrocious war crimes in Eastern Congo.

There are many other UN reports as well as the Rwanda Briefing (August 2010 ) that describe the ongoing human rights violations that Paul Kagame is continuing to commit in Rwanda and in the Congo.

Yet, all of these reports have found their way onto the shelves of the UN under dust. Why? Well there are various reasons. First, Paul Kagame has friends in high and low places and is able to silence almost anyone who dare judge him through his murderous hit squads.

A few examples are General Kayumba Nyamwasa who faced an assassination attempt in 2010, a case which is currently before the courts in South Africa; also, Frank Ntwali (Brother in law to General Nyamwasa) survived multiple stabbings also in South Africa in August 2012.

Outspoken Rwandan Humanitarian activists were in May 2011 also notified in the UK by Scotland Yard that they had credible evidence that hit squads were looking for them and could possibly kill them if they did not increase their security measures and take the necessary precautions to protect themselves and their families.

These are just a few isolated cases.

Those President Kagame has not been able to eliminate he has either imprisoned, driven into exile or sentenced in absentia to charges that Kagame’s regime has created through the ubiquitous title of the “Genocide Law” in Rwanda.

There are many more examples but for the sake of brevity let’s get back to the protest. 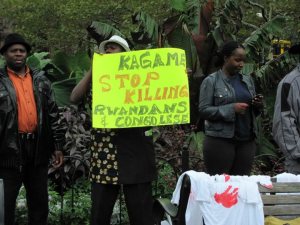 clear, their goal is for the U.N and the International Community to continue to investigate and hold Paul Kagame accountable for the crimes he has committed in Central Africa and around the world.

The previous reports on Paul Kagame have gone unnoticed until the most recent U.N Group of Experts report on what is really happening in the Eastern Congo (see the link above).

Due to this report, most European countries who contributed to Rwanda’s development as well as a nominal amount from the US have either cut or suspended their foreign aid to Rwanda which, in total, amounts to tens of millions of dollars and Rwanda is feeling the heat.

President Kagame has responded by sending out his Minister of Foreign affairs, Louise Mushikiwabo on mission impossible which requires her to travel the world over and vehemently deny all of the allegations in this damming report.

With each appearance she appears more and more disgruntled and it seems as though she does not even believe what she has to say yet she follows orders as dictated to her.

Other Rwandan officials take to social media to support their President and deny all allegations by the U.N. Group of Experts, they have even gone as far 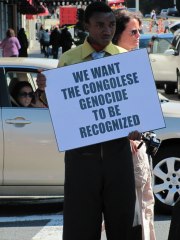 to discredit those on the committee who have had years of experience in this field. Since the testimony and rebuttal report put out by the Government of Rwanda they have begun a campaign of Agaciro Development.

This campaign is a fundraising campaign that all Rwandan businesses and residents are to contribute to with pride. All Rwandans are asked to sign a pledge of how much they will commit to donating each month in order to make up for monstrous gap that the withdrawal of foreign aid has left in their national budget because this aid makes up for 40% of the national budget.

Now, again, back to the sunny afternoon in Boston. Rwanda Day 2012 was a fancy fundraising maneuver in order to gain pledges from Rwandans in the Diaspora.

But, did it work? Doubts have arisen due to the already inconsistent reports coming out of the event. So far the Rwandan government owned and operated publications, such as The New Times and Igihe.com, have both reported that 4,000-5,000 people were in attendance.

Yet, they seem to have forgotten that the event was live web-casted on and in the main hall where President Kagame addressed a crowd it was clear that there were barely 500 people in attendance. One third of the chairs were empty. When President Kagame asked for Rwandans from North America to stand up less than half the room got on their feet.

The other half of the room was clearly filled with Rwandan officials, Rwandans who were paid to be there and many who were bussed in from Maine on transportation provided by the Rwandan Government.

Although, the busses were due to hold 500 people to arrive in two separate runs from Maine, one run was Friday afternoon and the other was early 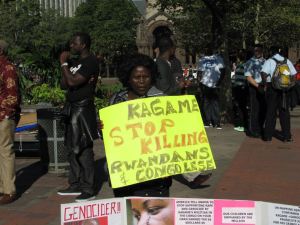 Saturday morning, but only 75 people actually arrived in Boston on those busses.

Some supporters reported even being turned away at the door because they refused to register or show their ID’s out of fear of being reported to immigration for supporting a regime they claim to be fleeing in fear for their lives and political/personal persecution into the safe haven of the US.

The Mayor of Boston was scheduled to speak but also did not show up to greet a visiting Presidential Detail from this African nation.

On President Kagame’s last visit to the US at WilliamPennUniversity he and the president of the University were named in a $350 Million lawsuit. That case is ongoing and is for the families and wives of the former President of Rwanda, Juvenal Habyarimana along with the French crew members and the wife of the President of Burundi who all perished in the shooting down of the plane they were all in on the order of Paul Kagame through his RDF soldiers.

This accusation has also been vehemently denied by President Kagame and his government except for two major political opposition figures who have gone on public record and under oath, General Kayumba Nyamwasa and Dr. Theogene Rudasingwa, that President Kagame confessed to ordering the assassination of President Habyarimana in order to claim power in Rwanda.

These two men were as close as brothers to Paul Kagame in the years following the end of the 1994 Rwandan Genocide. This assassination has also been called an “open secret” in Rwanda. Could the Mayor of Boston have feared a similar fate of being named in a lawsuit for hosting such a controversial character?

Back on the ground outside The Westin Copley those opposing President Kagame remained vigilant in their protest which Claude Gatebuke, a 1994 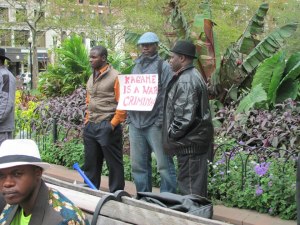 Genocide survivor and human rights activist, riled the crowd with his chants and enthusiasm.

At the closing of the protest representatives from each of the organizations present gave thank you speeches and words of encouragement to keep the struggle alive for the sake of freedom in Rwanda, Congo and all of Central Africa.

Although, the question remains, how many people have to die senselessly at the hands of this dangerous regime in order for the world to take notice? Are the six million dead in Congo not enough? Are the 800,000 killed in the 1994 Rwandan Genocide not enough? What about those who spoke out or openly criticized the current ruling party in Rwanda who have never been seen or heard from again?

What about the 150 Hutu prostitutes that have been systematically murdered in Rwanda over the last two months?

Is this not enough yet? How much blood has to be on this ruling party before the world says “enough is enough” and agrees to hold President Kagame at The Hague while we investigate further?

How many have to die?

Rwandans deserve a country in which they are free to speak and free to have democracy in their own way on their own terms where every member of society has a voice.

What is your opinion about this? Cancel reply

This site uses Akismet to reduce spam. Learn how your comment data is processed.